Ten Fun and Funky Ideas for Your Wedding

Your wedding day might be quickly approaching, but that doesn’t mean that you don’t have time to implement one more great idea.  Check out these fun and funky concepts that we think you will love! 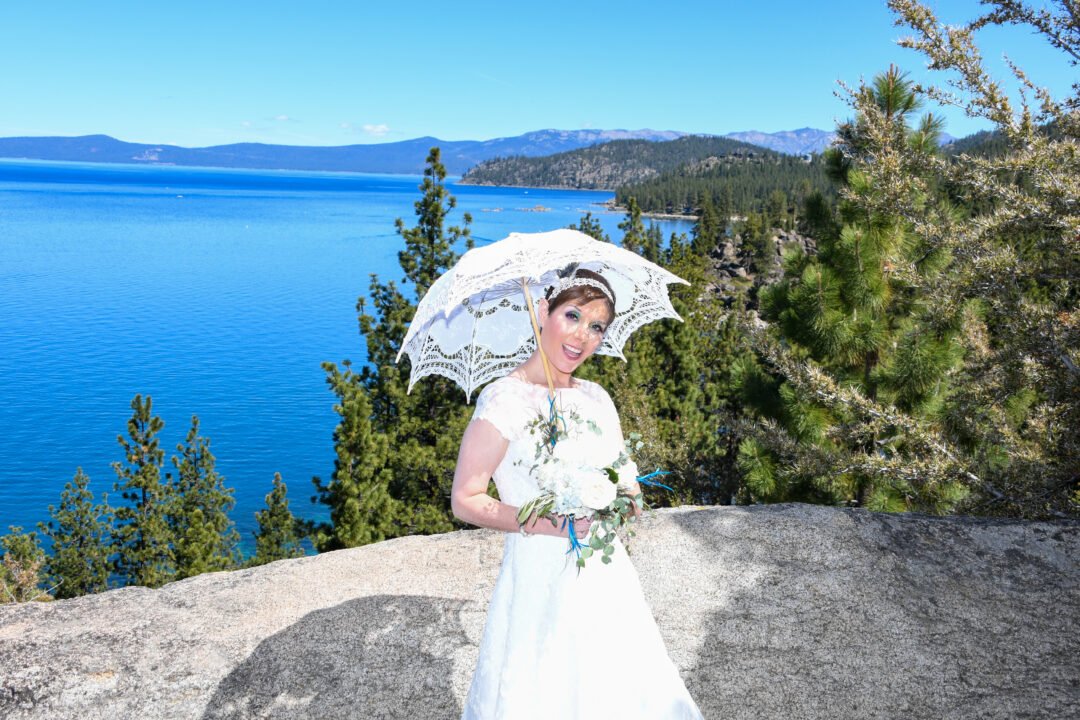 The Wedding Spell Of Lake Tahoe. 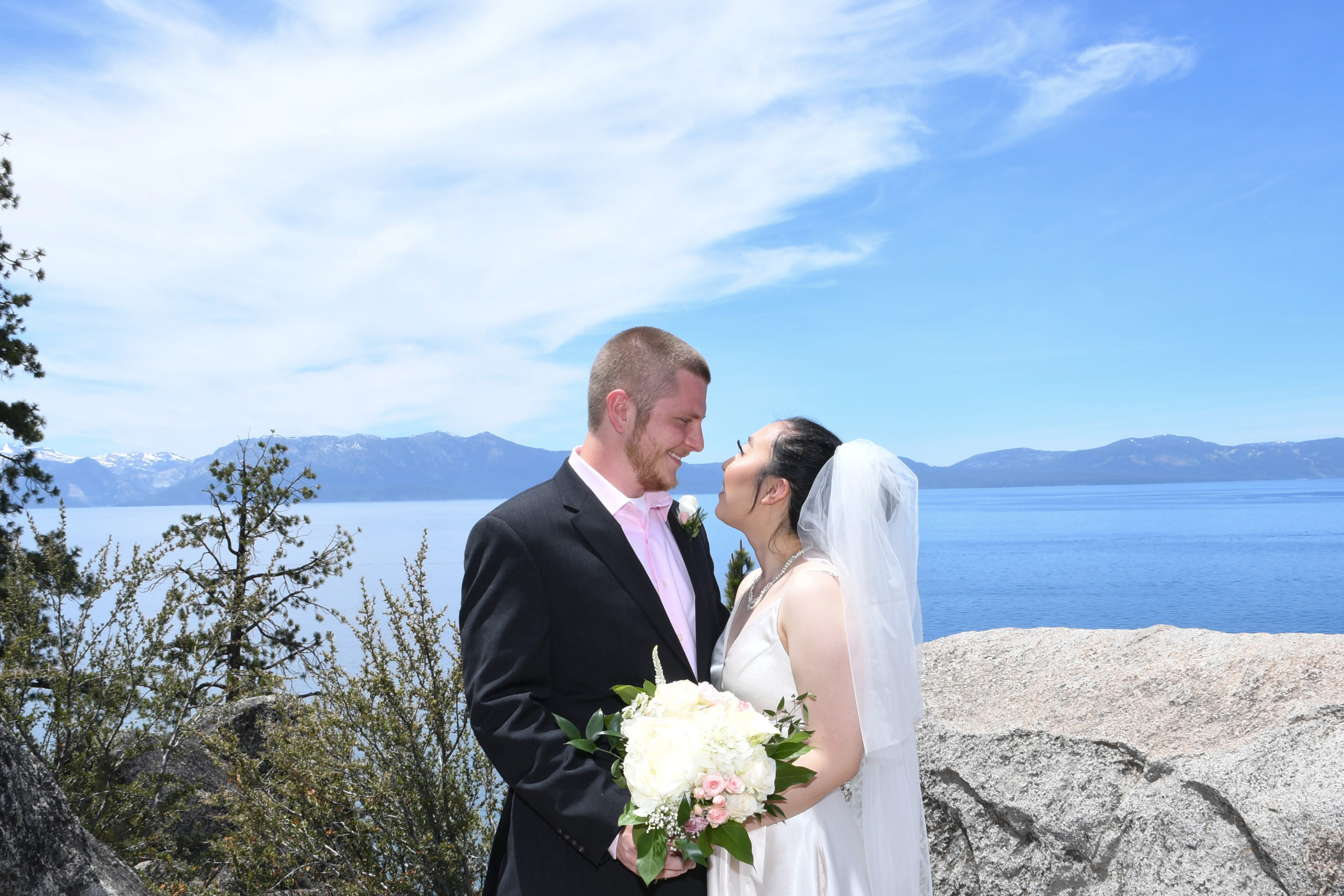 Thinking Of Eloping To South Lake Tahoe? We’re Here To Help You!

Your first thought might be ‘eloping’? Is that really possible? Is it possible to 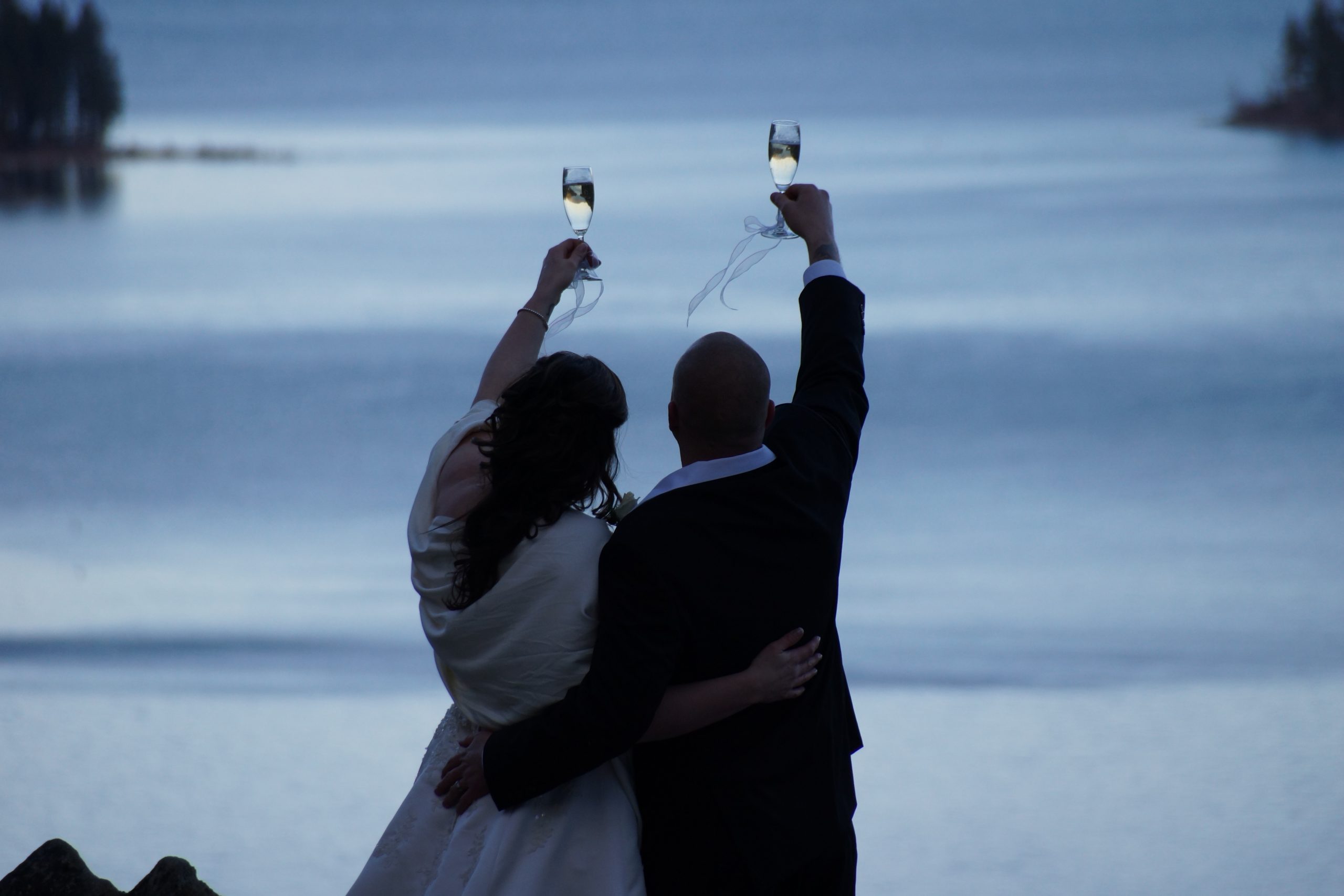 Reasons To Elope With Your Better Half .

This might just be the first time you’re hearing about this. If you are 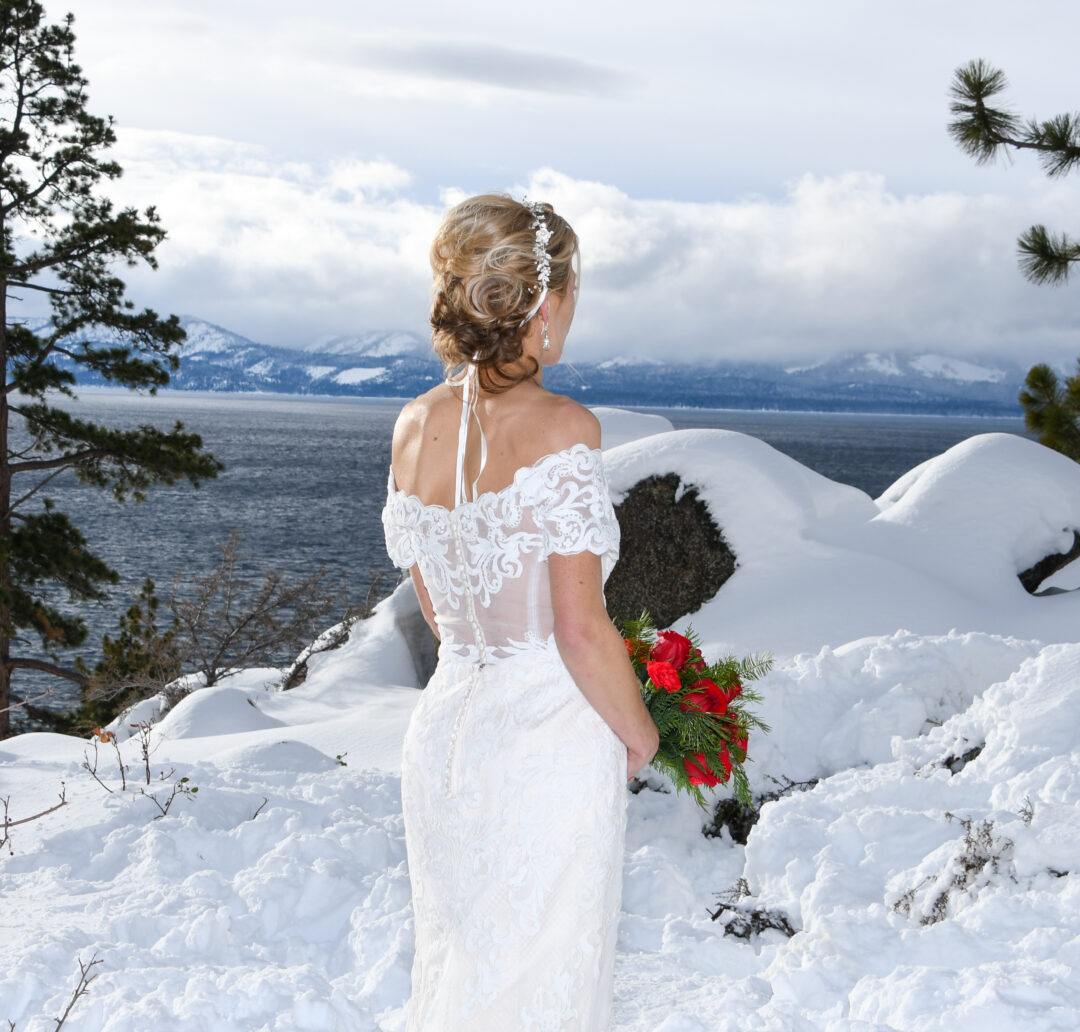 South Lake Tahoe Weddings: Put a Pin On It!

If you’ve finally put a ring on it, it's time to decide a destination

Doug Wyckoff
21:57 25 Jun 22
We renewed our wedding vows after 27 years. Everything went extremely well and just as planned. Couldn’t have asked for any better setting, minister, photographer and ceremony. Highly recommend!!

Arlene A
20:25 06 Jun 22
Josh and team gave us a wedding to remember this June. The photos were nothing short of amazing. They know exactly what to do and whicg shots to take and how to coordinate guests on a short notice. Even when it was slightly raining they were ready for the weather. They know how to liven up the mood. Highly recommended. Thank you from Sam and I.

Vince Sarelli
14:52 15 May 22
Joshua was amazing! After a hospital stay for a kidney stone the night before, which put my bride behind for Saturday...he took control and calmed the situation. He is a real professional and took excellent photos. The minister was also great. Thank you again Joshua for calming my bride down and getting it done! We love the pics and loved the service.

Misty B
23:48 03 Jan 22
Our experience with Josh was wonderful from start to finish. I originally sent an email in October outlining my questions about his service and requesting a New Year’s Eve ceremony. He responded promptly and professionally. We then spoke on the phone that day and our conversation was helpful so I booked with him on the spot.I will outline a review for each element of the package because I know when I was researching this would have been helpful for me.Coordination: The Lake Tahoe area had record snowfall the two weeks leading up to our wedding. Roads were closed and I was very worried that we wouldn’t be able to get there or get married outside by the lake. Josh took our worried phone calls and offered reassurance. He promised that he would find solutions no matter what. He took all of the stress out of it. He coordinated the flowers, the minister, and the outdoor venue without breaking a sweat during a time when delivery trucks couldn’t even make the drive.Flowers: PERFECT! See the photosMinister: professional and sincerePhotos: We love our photos. The thing to remember is that he gives you the SD card before you leave. They are not edited. What you get are professional quality photos that you can edit with a phone app. The pictures are high enough quality so that you can blow them up to very large sizes without issue.I cannot recommend him enough. I know it’s a big decision. Wishing you the best for your wedding!

Joe Campos sr.
05:01 30 Nov 21
I want to send out a GREAT BIG THANK YOU to Josh. We contacted him at the very last minute and he immediately brought my stress level down from 10 to 0. He got right on things and did a fabulous job taking over. He was very patient with us all as we was running late when the limousine arrived. He never once complained or made us feel like we were a pain in the rear. Which i know we were Lol! The photos were great, his service was awesome all the way around. Thank you again Josh for making our daughter's special day a very special day ❤.

Beverly Fortune
16:39 05 Oct 21
Thank You Josh! Putting together a wedding from 3,000 miles away is pretty stressful, but Josh made me feel at ease right away. His service was beyond anything we expected. Josh was responsive from the initial phone call to when the wedding was over. And, when we got into the limo after the service, Josh had our wedding pictures playing on the television which was just amazing!Every aspect of our wedding was smooth and seamless. The services that High Mountain Weddings provide are incredible. From helping us with our marriage license, to providing the Minister (Andy, who was fantastic!), the wedding site was just perfect - so perfect that some of the photos look like we were in a studio in front of a green screen!Every detail that Josh and I discussed over the course of 4 months was executed perfectly on our big day. The flowers I selected were fresh, colorful and beautiful.Josh even recommended Image Salon for wedding hair and make up and they were outstanding too! He helped us with celebration plans post-wedding with some terrific restaurant recommendations and also shared a few sightseeing spots that are locally known that were great.I also wanted to have our wedding videotaped,so Josh took care of that too. Our videographer, Jered, was a true professional and I already have the raw footage (received just 3 days after the wedding), and that video was so good, I can't wait to see the edited version!I give High Mountain Weddings and Josh the highest recommendation available, if I could give more stars I would.Thank you Josh for making our day so special. We will never forget how wonderful you are!Much Appreciation,Beverly and John MurphyBlue Point, NY

Deanna Mead
00:25 26 Oct 20
It honestly could not have been more perfect! Thank you so much for everything? 😁

Janae Pasillas
18:56 23 Aug 20
Hi Everyone,I just want to start off by thanking Josh for making our special day Amazing!! From the first time I called him to talk about booking our wedding to the day of the wedding Josh was great and very accommodating. I asked Josh if he would be able to come over before the wedding and take pictures of the wedding party he said no problem! He was there on time and took great before the wedding photos. He knew all the right angels and positions to stand which made our photos turn out great!The location we chose was Emerald Bay package and the site Josh took us to was breathtaking!! I couldn’t of asked for a better site this site was Amazing and the best part is Josh allowed us to bring our two fur babies in the limo and they were allowed to be apart of our wedding! Josh got some great photos of them in the wedding! We are so thankful and happy we chose High Mountain Weddings! I would highly recommend Josh and his team they are Amazing!!Thank you so much Josh we appreciate you!

Jessica Summers
18:17 18 Aug 20
Josh is very professional and very focused ! We absolutely loved all of our pictures !!they came out amazing! Great wedding planner!

Chris Frambes-Wheeler
00:00 23 Jun 20
Thank you to Josh and High Mountain for the most beautiful ceremony! This is such an incredible service and even with all the COVID 19 stuff going on, my husband and I had an incredible wedding. Seriously, the price and service is unbeatable. Thank you so much Josh!!!

Martin Williams
05:18 25 Feb 20
Thank you for making our wedding ceremony special! We were worried that we weren't living there and couldn't see the location. Emerald Bay Beach, where we were married, and it was so beautiful. The pictures have come out great! I'm giving A+ to High Mountain Wedding. We didn't have any problems with anything! It was going very smoothly. Everything was prepared so well that it took all the fear out of our wedding.

Marilyn Jimenez Morales
00:40 17 Feb 20
High Mountain Weddings was a wonderful experience. They were very organized and we went home with amazing photographs. We would recommend their services to anyone looking for a stress free Lake Tahoe Wedding.

jerry loise
07:46 30 Dec 19
High Mountain Wedding is such a wonderful wedding planner. They are also a fabulous event coordinator. They Have a super knowledge of the South lake Tahoe Places and so helpful to arrange any event or wedding. They will ensure that your event will be everything you could hope for and more! I highly recommend the High Mountain Wedding for South Lake Tahoe Wedding Plan.

Perriad Missy
06:18 19 Aug 19
High Mountain Weddings is a joy to work with.I didn't have strong ideas or have specific visions of how I wanted things to look. She led me through various backdrop options, uplifting and decor.The venue looked perfectly on the day of our marriage Their charges were very reasonable definitely recommend working with High Mountain Weddings .

Cristina Himmer
11:47 14 Jun 19
I had the most breathtaking wedding with High Mountain Weddings We loved our experience,they made it super easy & stress free! the staff was great and so helpful.Would highly recommend!

Dana Savage
01:57 04 Jan 19
Josh /High Mountain Wedding was an amazing experience. The venue was awesome and Josh could not have been more professional or made our day any better. I highly recommend this business for your wedding day, it will be an amazingly extraordinary experience!

Michelle Riggle-Teggeman
02:06 07 Sep 18
Planning a wedding can be overwhelming (especially when you're out of town), but luckily we found J Dunbar! This experience was amazing and completely stress-free. He cared about making our day special, and the photos were the best part. We had the wedding of our dreams, all thanks to High Mountain Weddings! Do yourself a favor: enjoy your day, and let these guys handle the details.

stacey jones
05:28 14 Aug 18
I personally find that High mountain weddings offers mind-blowing services for destination weddings. The way they work is fabulous. Each team weather its Hospitality team, Production team, or Logistic team they do their work with all perfection.Totally reasonable & reliable services.They not only planned our wedding but they made it a grand celebration and gave us auspicious memories. They work like it's their own family wedding, perfect co-ordinations of joy and rituals of wedding.

Rivan Agarval
09:52 13 Jun 18
I thank High Mountain weddings team very much for making my day so special. The staff members are very understanding and Co-operative! With them you do not need to worry, they get you a simple solution to every problem.

leanne capper
14:56 30 Aug 12
Josh, literally made our dream wedding come true. From start to finish, it was relaxing, stress free, special and to summarise...perfect! The location was just stunning and the photos are fantastic. I can't thank him enough. :)

Lexy Spendlove
15:18 20 Aug 12
Our wedding couldn't have been more perfect! We wanted a simple, stress free ceremony above Emerald Bay, and High Mountain Weddings pulled it off for us flawlessly! Rev. Josh was fantastic and very attentive to detail, the flowers were gorgeous, our minister was wonderful and the photo's Rev. Josh took were amazing! It was a dream come true standing above Emerald Bay and marrying my love! The limo ride was so much fun too! Thank you High Mountain Weddings! We will be forever recommending you to anyone wanting to get married in Lake Tahoe.

Stacey Lacy
22:59 04 Jul 12
Rev Josh was amazing! He was able to help me with a last minute request, dealt with my videographer who had a nasty attitude, provided beautiful flowers for my receiption and kept us all smiling!! Best choice I could have made!! Thanks so much Rev Josh! :)

Heidi Martell, MA, BSN, BA
19:09 31 May 12
We could not have asked for a more perfectly tailored day or more generous service and attentiveness. Rev. Josh accommodated our every need from getting paperwork done early, delivering flowers to the cake maker and the reception, to arranging a beautiful ceremony and amazing photographs. This is the place to go if you wish for a simple, stress-free, unique wedding experience.
See all reviewsWrite a review